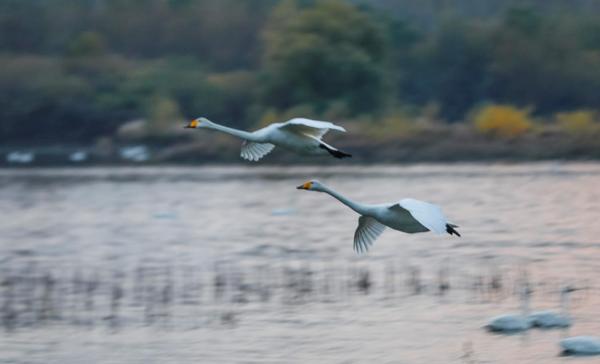 White swans in Sanmenxia. [Photo by He Zhiquan]

Location: Located in the west of Henan Province , Sanmenxia City is seated at the convergence of the Henan, Shanxi and Shaanxi provinces. Within the province, it neighbors Luoyang in the east and Nanyang in the south. The city is also bounded on the west by Shangluo and Weinan of Shaanxi Province. In the north, it is separated from Shanxi Province by the Yellow River.

First established during the Spring and Autumn Period (770BC-476BC), Hangu Pass once played an great role in history as a pass of vital importance between ancient Luoyang and Chang'an (Xi'an). This grand building complex is 15 kilometers (9 miles) north of Lingbao City. If one man guards the pass, ten thousand are unable to pass through. Additionally, Taichu Palace in the building complex is said to be the place where Lao Zi, the founder of Taoism, created his greatest masterpiece Daodejing (Tao Te Ching), commonly translated as the 'Classic of the Virtue'. So, Hangu Pass is also an important site for Lao Zi's believers to commemorate him.

30 kilometers (19 miles) from city downtown area, the dam, begun in 1957, is the first hydro project on the main stream of the Yellow River in China. The Yellow River zigzags 120 kilometers (75 miles) though the city with the most spectacular scenery in the dam area.

It is a famous Taoist site located in Yuling Town of Lingbo City. The Yawu Mountain scenic area is the largest natural reserve of Henan, and its main peak is the highest point in the province. Large temple fair will be held every June. Main sights include precipitous peaks and mountain pass, as well as some grand Taoist buildings, like Nantian Gate, Yuhuang Hall, Tianyi Palace and so on.

Other Scenic Spots: Baolunsi Pagoda (one of the four famous old echo architectures in China)

History: According to the legend, Yu the Great, the ancient hero of controlling torrential flood in prehistoric time, slipped up the high mountain into three gorges. Hence the city gained its name of Sanmenxia (three gate gorges). As an important headstream of Chinese civilization, it was the central region of the Xia (21st - 16th century BC) and Shang (16th - 11th century BC) dynasties. Shanxian was established in the northern Wei Dynasty (386-534), part of the northern Dynasty (186-581), and continued into the Qing Dynasty (1644-1911).

Physical Features: Sanmenxia City is situated in the hilly area of western Henan Province with mountains and hills making up over ninety percent of the city's total territory. Mountain ranges fall and rise, forming gullies all over the city.